Do You Need to Replace Your AC in 2021? - Air Temp Service Co
Skip to content

In the late 90s, in an effort to reduce environmental strain and the reliance on harmful chemicals, a law was put into place discontinuing the use of Freon in 2020. It was one of the most common refrigerants used in air conditioners up until only recently. But don’t run out to buy a new AC just yet; there are some exceptions we’ll talk about below. 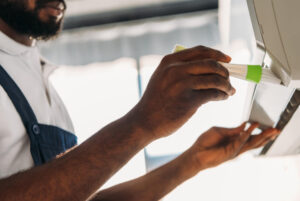 What Are the New Refrigerant Regulations that are in Effect

Last year, the new refrigerant regulations implemented by the Environmental Protection Agency came into effect. As Freon is a major source of HCFCs (hydrochlorofluorocarbons) which are harmful to the environment, in particular, the ozone layer, the agency decided way back in 1992 to phase them out. When it comes to Freon, also referred to as HCFC-22 or R-22, it was decided after 2020 no new air conditioners would be built with the chemical to help protect the ozone layer.

Although the ban went into effect last year, most modern HVAC systems built in the last decade or so don’t rely on Freon due to such environmental concerns, so the banning on using it in new ACs is more of a formality. However, there are still plenty of old AC units all over the country that do rely on Freon, so what if your home’s system is one of the older units? We’ll get to that next.

What Happens if My AC Requires Freon as a Coolant?

For those with older air conditioning systems (a decade or older on average), it will still likely rely on Freon as a coolant. It’s important to note that Freon is only an environmental hazard when leaked into the surrounding environment or being improperly disposed of, so even if your AC still has it, you’re not in any physical danger.

Another important thing to keep in mind is that if your HVAC system still runs on Freon, you don’t have to stop using it, the government has simply banned the manufacturing of it in the U.S. as well as its importation moving forward. But that doesn’t mean that there still won’t be a wealth of Freon that’s already been produced that can still be legally bought and sold.

How Will the Phaseout Affect You?

Eventually, you will have to phase out that Freon for a more environmentally-friendly coolant, but it doesn’t mean you need to buy a whole new AC unit. Most older systems can be quite easily retrofitted by your local HVAC service team. However, since AC units rely on specific refrigerants and their components are designed as such, it’s not as simple as just switching out refrigerants, but it’s still affordable.

For example, if the coils of your current HVAC unit are compatible with R410 (a more environmentally-friendly alternative to Freon) then trained heating and cooling technicians can simply replace your outdoor unit rather than the entire thing. In fact, many who’ve retrofitted their systems in such a way have found that with their new R410 compressor outdoors, they’re also receiving more efficient service indoors as well.

If you do choose to retrofit rather than replace your system, it will require an extra bit of maintenance and inspection occasionally to ensure all of the parts are working properly, so having a reliable HVAC technician on-hand is always a good idea.

If retrofitting your system doesn’t seem worth the cost, particularly if your system is 10-15 years old anyways, it may be best to invest in a new one. Although you might cringe at the initial investment costs, you’ll likely make up that investment rather quickly due to the increased efficiency of a brand new HVAC system. You’ll experience much lower utility bills, your new system will likely be easier to maintain, and you won’t have to worry about breakdowns or parts replacement with a solid maintenance plan in place.

Contact us today for emergency air conditioning service and more!

If you’re in need of emergency air conditioning service, we’re available around the clock. For more than a decade, the team from Air Temp Service Co. has been providing high-quality heating and cooling services to all those in Bergen, Essex, Morris, Union, and Passaic counties and the surrounding area.

In addition to offering HVAC repairs and retrofits, we’re also equipped to install new HVAC systems, as well as provide expert advice on maintenance and other issues. We carry high-efficiency central air conditioning systems designed to cut your utility bills without ever sacrificing comfort.

For those in need of heating maintenance and repairs, our services run the gamut and we work with every type of system out there. The team from Air Temp Service Co. is also equipped to perform oil-to-gas conversion services and is familiar with both high-efficiency boilers as well as furnaces.